Whilst we didn’t doubt the ability of our liaison officer, there was still a certain amount of trepidation this morning as we woke wondering if our permits had been suitably signed off. As it turned out, he’d worked his bureaucratic magic and even as we went to breakfast at 0630, the jeeps were waiting in the car park of the hotel.

As I wrote in yesterday’s blog, there is always a certain amount of savouring the (relative) creature comforts at this stage, knowing that it’s the last time you’ll do many things for 6 or 7 weeks. Last night in a bed. Last proper (and hot) shower. Last chance to eat at a table which is at a normal height (rather than down by your knees). And last, but certainly not least, last chance to use a sit down loo. It’ll be squats and strong thighs from here on out!

The ‘jeeps’ in this part of the world are very much part of the charm of this type of expeditioning. 1970’s model Toyota Landcruisers, usually in wonderfully bright colours, bright blues, pinks and for Tomo, Terry, Zaid and me, one in a particularly strong plum colour!

Considering the state of the roads here, and the abuse that they must get, the jeeps are in amazingly good conditions, shiny paint work, glistening chrome, not a dent or scratch to be seen. It is a testament to the drivers, not only for their skilful navigation of the epically poor roads and tracks, but also their care and attention to their vehicles. Of course there is a question about how much of the vehicles are original, and I suspect (and an ‘Only Fools and Horses’ references for the Brits) that they may be a bit like ‘Trigger’s broom’. Perhaps in this circumstance, ‘Trigger’s Vroom’ would be more apt.

The route is 75 miles, which for the first 40 miles, where you are on pretty decent blacktop, seems like you’ll get to Askole in no time. Of course, once the blacktop comes to an end, that’s when the fun (or lack thereof) really starts. The constant bumping around, coupled with a large intake of fluids meant that we needed to stop every 30mins or so for a pee. Cue every member of the team crashing out of the vehicles and all standing in a line bringing some much needed liquid refreshment to the arid and dusty landscape.

This whole area is controlled by the Pakistan military (due to the proximity to Kashmir specifically, and perhaps to a slightly lesser degree, China). This means that we have to stop at every checkpoint to hand over various documentation. It’s times like this that having a military liaison officer (LO), really helps, especially when he’s the equivalent of a major. It also means that you can’t take any pictures of the bridges, as they are strategic assets. However, due to the incredible nature of these rickety wooden suspensions bridging the steep canyons and raging torrents beneath, there was a fair amount of surepticious photography conducted under the radar.

We paused for lunch at a lovely little ‘restaurant’, where we had curry, dahl, rice and fresh salad in the cool shade of apple and mulberry trees. With deliciously sweet mulberries for pudding, we sat back and gazed up at the incredible mountains all around up. Baig, our trekking guide said that most of them were probably still unclimbed. 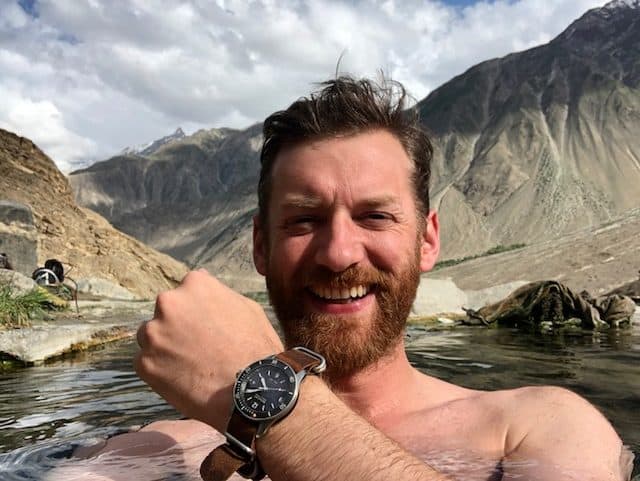 As we got closer to Askole, we stopped the convoy, and split in two. A group who would continue straight onto Askole, and another group who would go for a short walk to some thermal springs. Despite my two previous visits here, I’d never visited the hot springs (made famous by a wonderful picture of Doug Scott reading a newspaper in them in the late 70s), and the opportunity to have a quick dip was too much to miss.

A group of 6 of us made the steep scramble up the mountainside to the springs, and having dipped a finger in to test the temperature, immediately stripped off and jumped in! Whilst not bubbling hot, it was lovely and warm, and we lay back, enjoying the soothing effects of the sulphurous water and the majesty of the snow topped peaks around us. 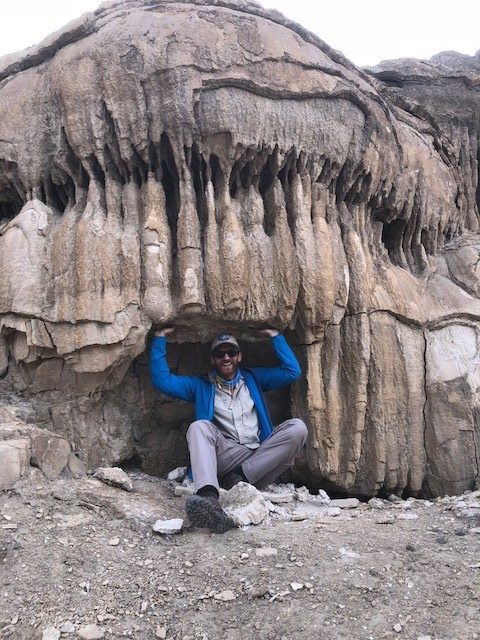 By the time our little hot-spring splinter group arrived in Askole, camp had been set up, tents erected, and hot drinks and cake was on offer. A perfect end to a busy day of mainly sitting on your backside!

Askole is a simple yet charming little collection of mainly mud brick buildings and compounds set in the most beautiful lush green pasture and terraced fields. It is for all intents and purposes the end of the road, and unless you live here, or you are commencing a trek up the Baltoro, there is no reason to visit. The locals are incredibly warm and friendly, with the children waving, laughing and mobbing you, the young men crowding round just observing, and the women either working in the fields or at home out of sight.